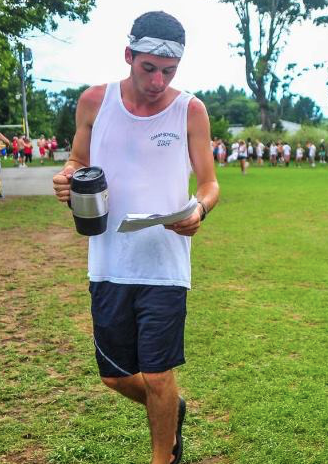 On the first day of college, I felt swallowed up and overwhelmed by the road ahead. Something felt strange. I had never before been in a community so populated, so large, yet despite this I had never felt so alone. Scrambling, I searched for familiarity and security.

Later, I sat in an orientation meeting about the “keys to success in college,” stuck somewhere between boredom and anxiety. Several students and faculty sat at a panel and told us Freshmen what they believed were the essentials to get the most out of college, and do well, academically and otherwise at Skidmore. Everything seemed generic, and started to sound the same. “Work hard. Balance your schedule. Try things new things. Make friends.” It all seemed easier said than done. In need of some fresh air, I snuck out from the room to read some of the “stoptime” stories which I had heard so often over my many years at Schodack. And in this moment, I realized that I was more prepared and confident for the path ahead than I was giving myself credit for.

Everything that was discussed in the meeting (and more), I had found at Schodack. Throughout my years at camp, I learned all the tools that I needed to be fine at school. Tribals taught me that competition can bring out my best, but only if I keep my head on straight. Campers’ Choices taught me independence, and how to think for myself. I learned to embrace my inner crazy as a Junior Camper, how to lead and when to be led as a Waiter, and how to speak up and support others through hard work and care as a Bunk Counselor. And, of course, I learned from the very start that there’s nothing out there better than Apache. Nothing.

But above all of this, I learned something new about myself every day at Schodack. Camp taught me to be myself, no matter who’s watching. Camp taught me to speak my mind, to show my true colors. Camp taught me that it’s okay to be different, to be whacky, to dress up and make believe. Without Schodack, I wouldn’t have learned about true friendship, the kind of friendship that’s on the phone with you at 1:00 AM on a moment’s notice when winter seems unbearable and you need a shoulder to lean on in the worst way. The kind of friendship that reassures you that before long, it will be summer, and joy, spontaneity, and calmness will be restored, friends will be together again, and everything will be good.

And then there I was again, back at college and out of my daydream. Eventually, the meeting ended, and so did orientation. Now, several months into school, I am still reminded of these values on a daily basis. Camp is an inseparable part of me. Schodack impacts every interaction, every thought, every decision I make, and I could not be more proud of it. The experiences I have shared at Schodack have been the most important, essential, and influential moments of my lifetime, and the tools acquired and lessons learned have prepared me for college in ways which no other chapter of my life has. And, inherently, it has provided me a home.

That is ultimately why Schodack has prepared me for a life in college. For as long as I can remember, Schodack has been my home, even when I couldn’t physically be there. Now, in a time when I need home more than ever, I know that I always have it, no matter the circumstance.