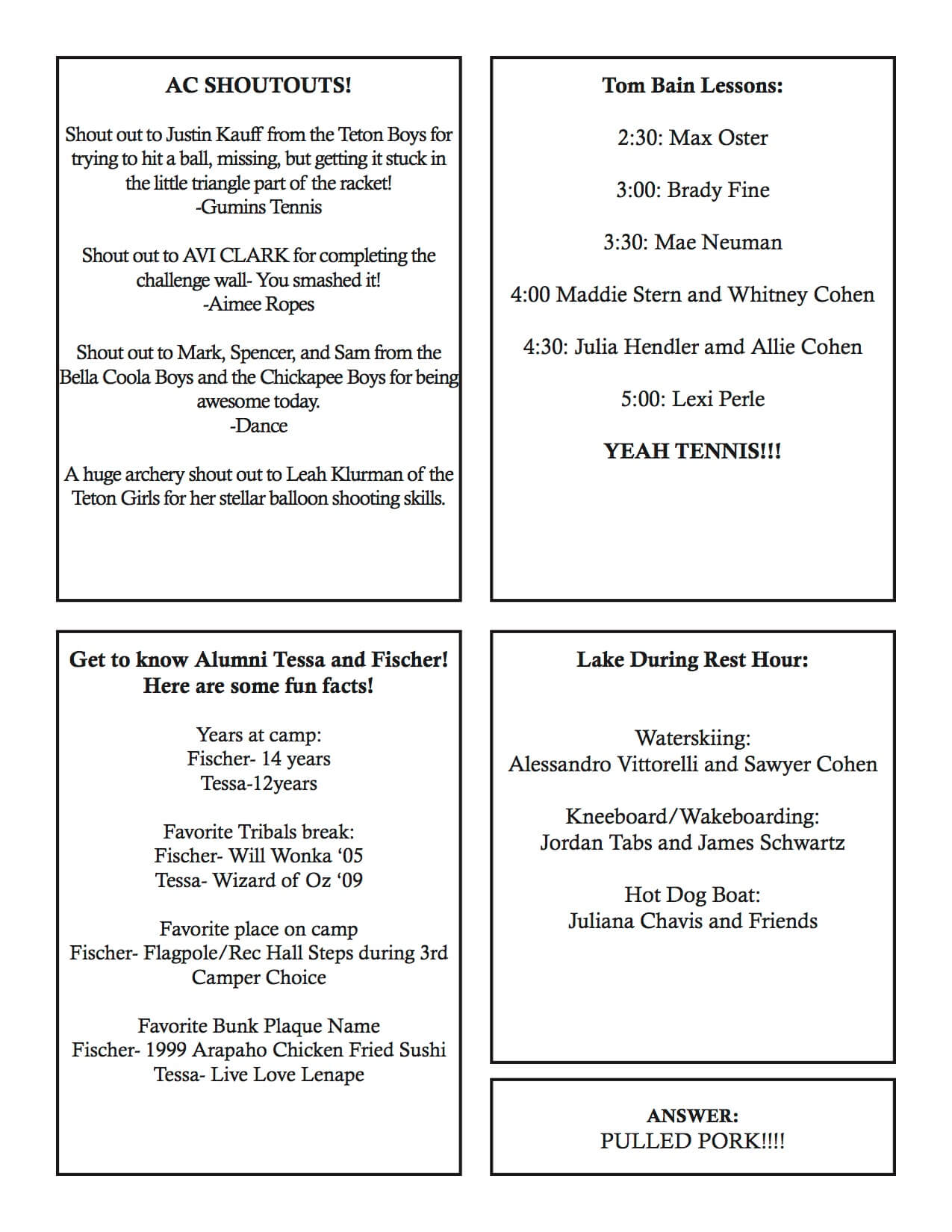 The first full week of Summer 2017 is complete, and things are off to a great start at the 12123! We had a nearly an inch of rain over the course of the first weekend, but nothing could dampen the Schodack Spirit and thankfully the clouds have cleared since then and the weather has been absolutely stellar!

Here’s a reflection from Matt on the Opening Day events:

One of my favorite traditions each summer is when my dad and I sit with each bunk individually on the Opening Day of camp. It’s a wonderful way to connect with each group and to welcome everyone in a really personal way. During these chats, we reinforce the values that are important to us at Schodack, hear from campers about what they are most looking forward to this summer and answer any questions they may have. These chats always reinforce what an incredible group of kids we have here at Schodack and make me so energized for the summer ahead!

This summer, I was particularly blown away by a certain aspect of these bunk meetings. I asked each group how they felt about our policy of not allowing technology at camp, and what it was like to leave cell phones, video games and computers at home. I was truly curious: Is it hard? Do you miss that stuff while you’re at camp? If you created the camp rules would you let campers bring those devices to camp? I expected to get mixed responses – some would agree with our approach and some would probably wish we allowed more devices at camp.

To my surprise, not one camper said they wished we allowed more technology at camp. The responses were amazing! Common comments included things like: “What? A cell phone at camp would be terrible. We wouldn’t talk to each other as much!” and “It is SO nice to get a break from all that for the summer” and “Video games at camp…that would just be weird.” A few campers did say they thought it would be tough adjusting to not having screen time and yes, one camper said she had a “farewell ceremony” for her cell phone the night before coming to camp, but everyone seemed to agree that a break from technology was a positive thing and more importantly, that it’s part of what makes camp so special.

I loved hearing these honest responses from the campers and it was gratifying to know that they appreciate the break from technology in the summer. With all the talk out there about how this current generation of children is more and more tethered to screens, it’s nice to know that a desire to connect in a more old-fashioned way, at least here at Schodack, is still alive and well.

All the best from camp,
Matt

This week marked the first all-camp special event of the summer — All for One. Bunks split into small groups with their staff, CAILs, and Second Year LTs to compete in three different areas on camp, cleverly named Warmth, Tradition, and Spirit. The activities themselves were all put on by the First Year LTs — who did a tremendous job running the camp for the afternoon – and were as diverse as corn hole, poetry, dancing, frisbee, 9-square, and more. Campers also got the opportunity to break some items in the Book of Records, such as the fastest climb up the cargo net at Gymnastics. All for One also featured the Corral Chip, which consisted of a makeshift driving range setup at the top of the horse corral hill for campers to test their skill and accuracy by driving golf balls into buckets and hula hoops at the bottom.

At the end of the day, the LTs at each activity tallied up points based on participation. Last year’s Senior 2 Boys, three-time champions of All for One, were actually running the events this time around. The Omaha Girls proved to be victorious this summer, also finishing a close second last year, and they loved their celebration party at the end.

Last Monday, campers and staff joined forces to compete in the Camper Counselor Tennis Tournament on Monday. Each doubles pair consisted of one camper and one staff member or LT—it was a great bonding experience for all! Congrats to Sean Pass (SS1 Boys BC) and Cooper of the Toltec Boys.

Tuesday was also the first Trip Day of the season! Junior and Middle campers took a trip to the water park at Zoom Flume, where they got to enjoy a lazy river and multiple different water rides—the most daring campers went down the Black Vortex! Super Seniors and First Year LTs got to experience the city of Saratoga Springs. Home of delicious sandwiches, funky T-shirts, and some incredible ice cream, Saratoga is one of my personal all-time favorite trips of the summer. 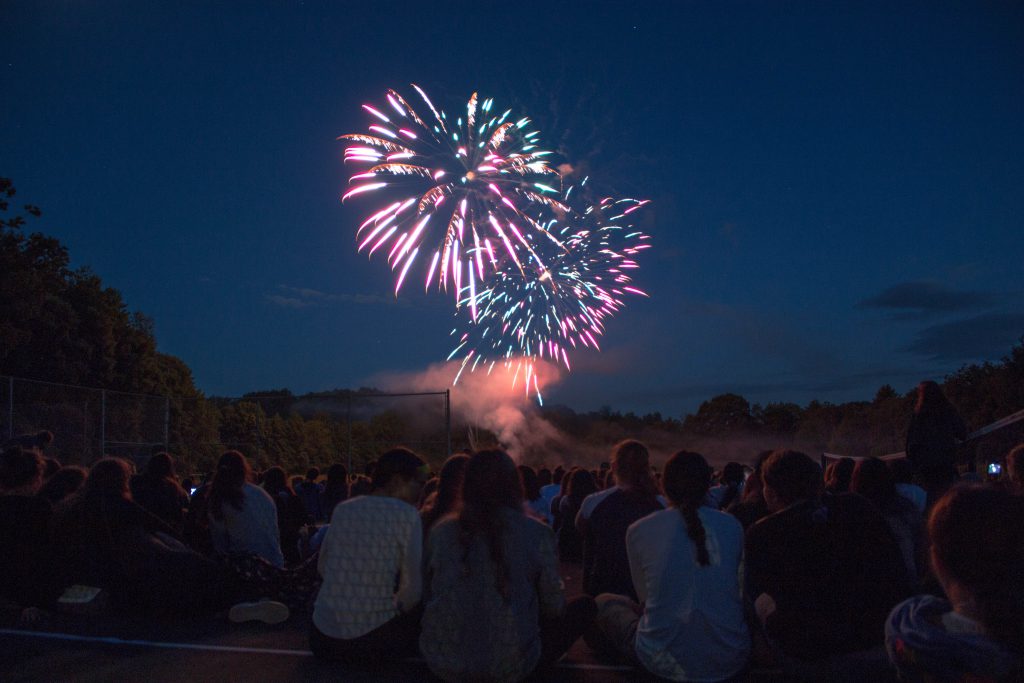 Here are a few more notable events that have occurred this week:

– Camp Schodack was well-represented at several intercamp tournaments in the area: for rising 6th and 8th grade boys in soccer, rising 8th grade boys in basketball, and rising 7th grade boys and girls in tennis. At the tennis tournament, Ben of the Toltec Boys won the boys singles bracket 2-1 in a super tiebreak. In the doubles tournament, we an all-Schodack final with Scott and Justin vs. Joe and Mikey (all Toltec Boys), with Scott and Justin ultimately taking it home in the end.

– The LTs held their first Challenge Day, with a packed day of events including playing in the mud, scarecrow making, and a cook-off.

– All bunks have been intensely rehearsing during rest hour and their spare time for Talent Show, which is this Sunday! It will be the first Triple Crown event in Schodack history to occur under ideal temperatures. Special thanks to the new fans!

– Paul and Linda took a group to see the New York City Ballet perform an evening of George Balanchine at the Saratoga Performing Arts Center.

– The Bella Coola Girls and the Biloxi Girls tied for first place in the Cleanliness Cup for this week—they had better scores on clean-up than the rest of the camp. Way to go girls!

– The Adventure staff have been running camping overnights for Junior Camp at our campout area, and the Horseback Riding staff have resumed their ever-popular lunch rides.

– Rehearsals for High School Musical, this summer’s special feature presentation by the Drama staff, are in full swing in the Playhouse.

– The Golden Bow tournament at Archery is well underway. Open to all campers, the highest score in each division will be entered into the Book of Records.

– New to Schodack this summer is Crossfit, which has proved to be very popular for every age division of camp.

– Tomorrow is our first of two Rookie Days and LT Carnivals, where potential new campers and their parents will visit for a special afternoon of tours and games. The parents will walk around for a tour of camp and meet with Paul and Matt, while the kids will get to join the rest of camp and enjoy the carnival in small groups led by Second Year LTs. 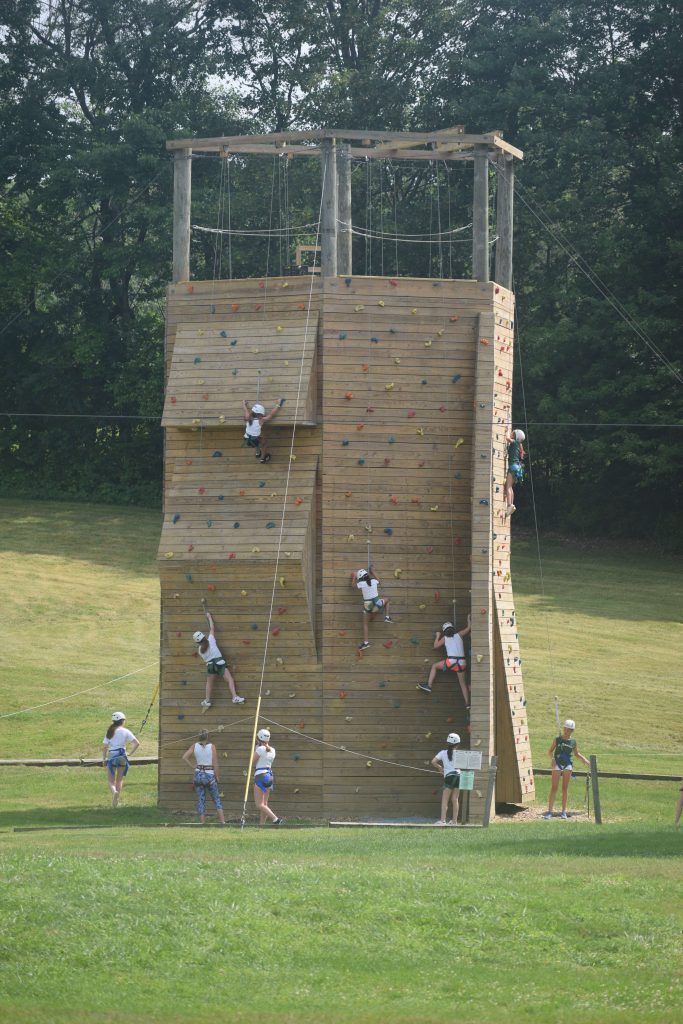 That’s all for now. Have a wonderful week, and be sure to check back next Friday for another update from the 12123! 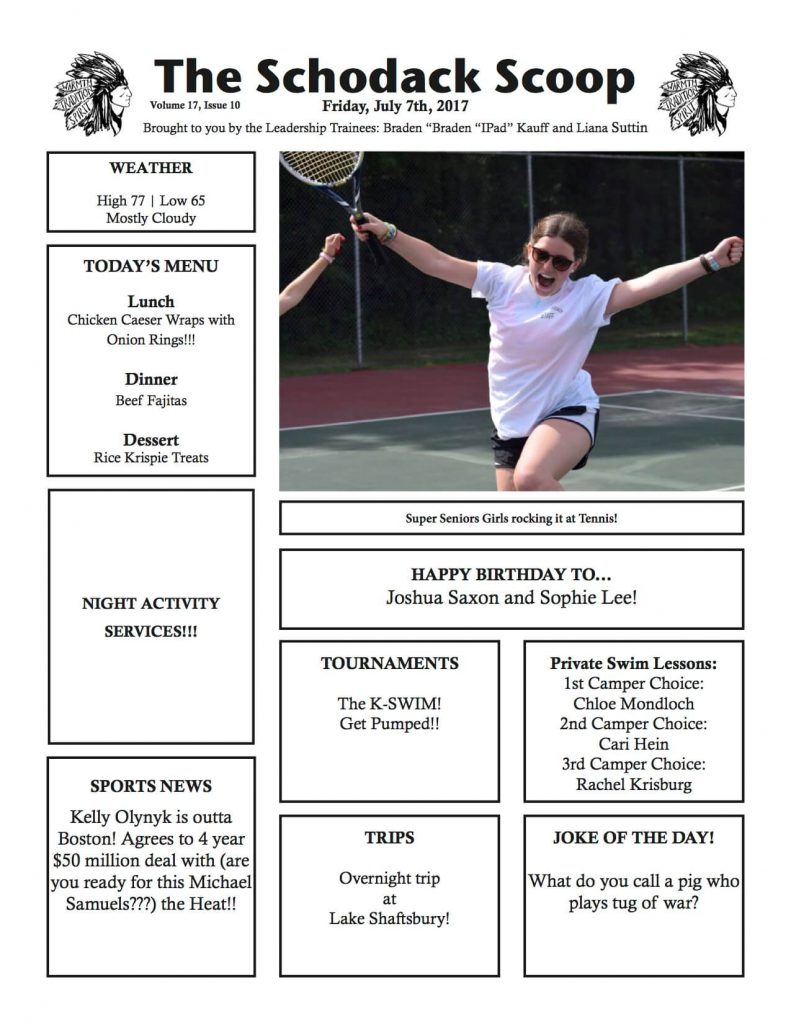 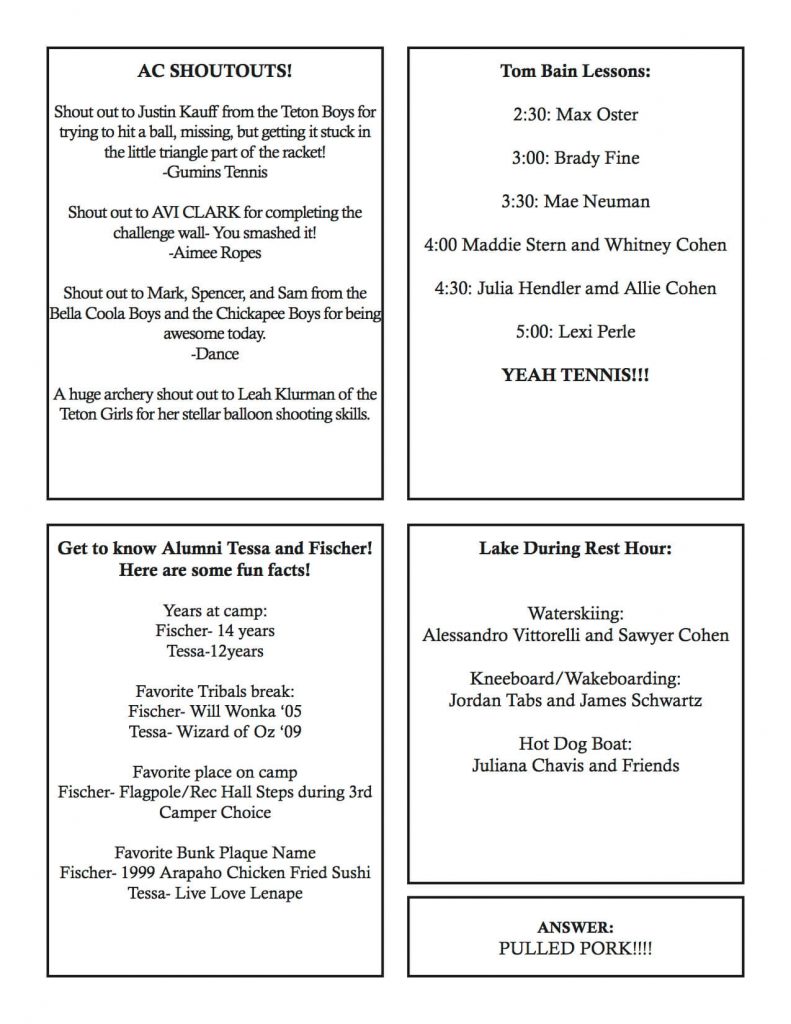