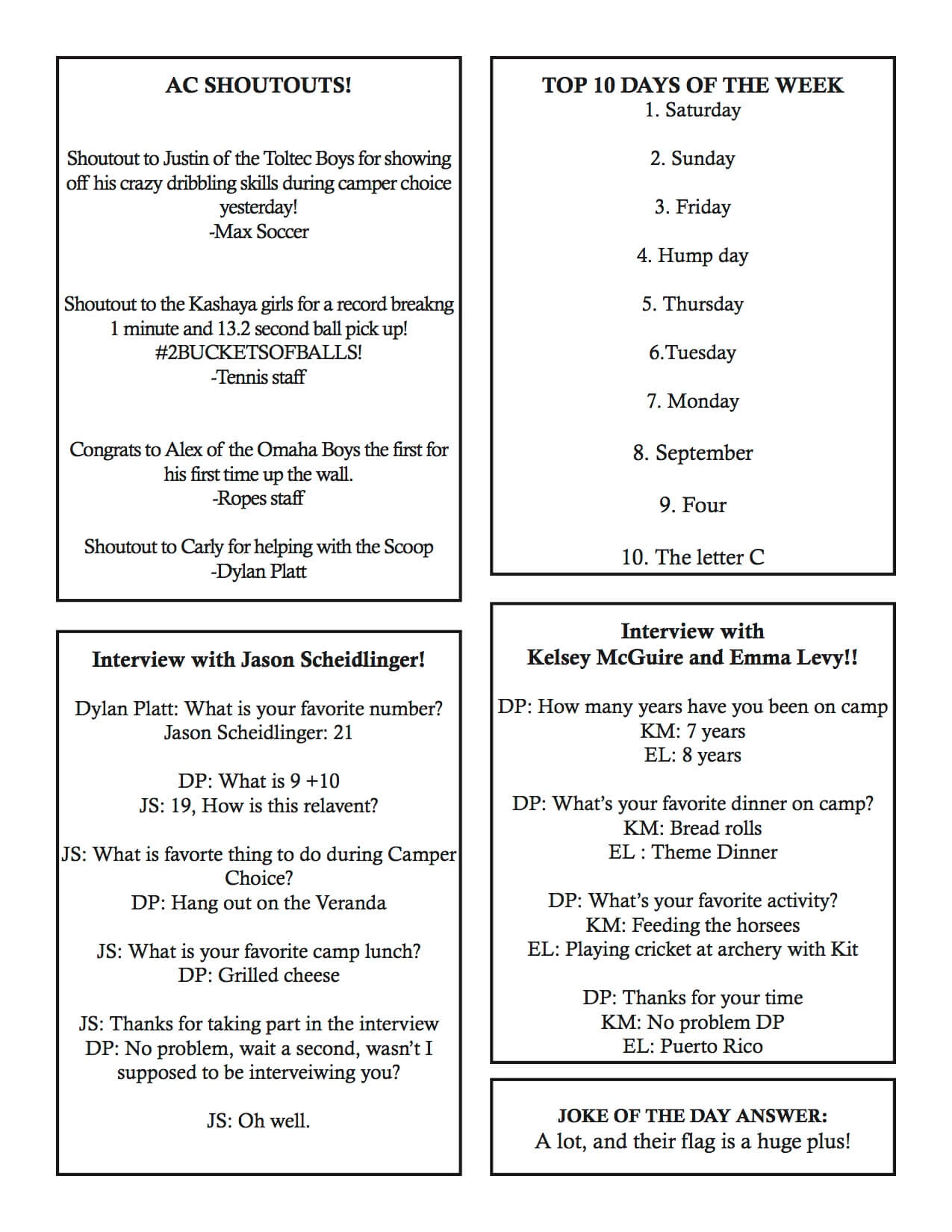 Hi again! For those of you just reading this blog for the first time, my name is Sam Holland, it’s my eighth summer at Schodack, and I’m excited to be bringing you the news this summer! Be sure to check out the blog every Friday for a new post — and we’ll send you a reminder email as well. You can also flip back through the earlier newsletters from this summer on the blog!

We had an incredible Visiting Day and were so glad so many of you could make it up to camp. Keeping with tradition, the rain held off until just after all of the parents left! After welcoming all of the Second Session campers on Sunday, everyone gathered in the Playhouse for the Counselor Show Part II.

We saw some amazing talent on stage, including, but not limited to, dance performances, silly skits, and incredible singing and instrument-playing. To open up the show, Paul and Matt walked around the audience and sang while Linda played “You Got a Friend in Me” on the piano — an ever-popular classic!

Here are some other notable events that occurred this week:

– A group of Middle Girls played at a Softball intercamp at Scatico yesterday, and we were victorious. Special shout-out to MVP Charlie of the Pima Girls for pitching all seven innings and allowing just a single run! Honorable mentions also go out to Leah of the Teton Girls and Mykayla of the Toltec Girls for some outstanding highlight reel plays.

– Paul and Linda took a group of campers to see a performance of Ballet Hispánico at Jacob’s Pillow Dance, a performing arts center in Becket, Mass. They will also be taking a group to see “Tanglewood on Parade” next week for a special evening trip day.

– Tonight, after Services, is the 12th Annual Rock, Paper Scissors Tournament. RPS is an all-time favorite for many campers and staff — some will even argue that there is a strategy to the game!
[brief Owen interlude: “I most certainly would say it’s a game of skill, Sam, since it’s a ‘first to ten points’ event. Having said that, it’s truly a contest where the youngest campers can take on (and have beaten) the oldest counselors.”] 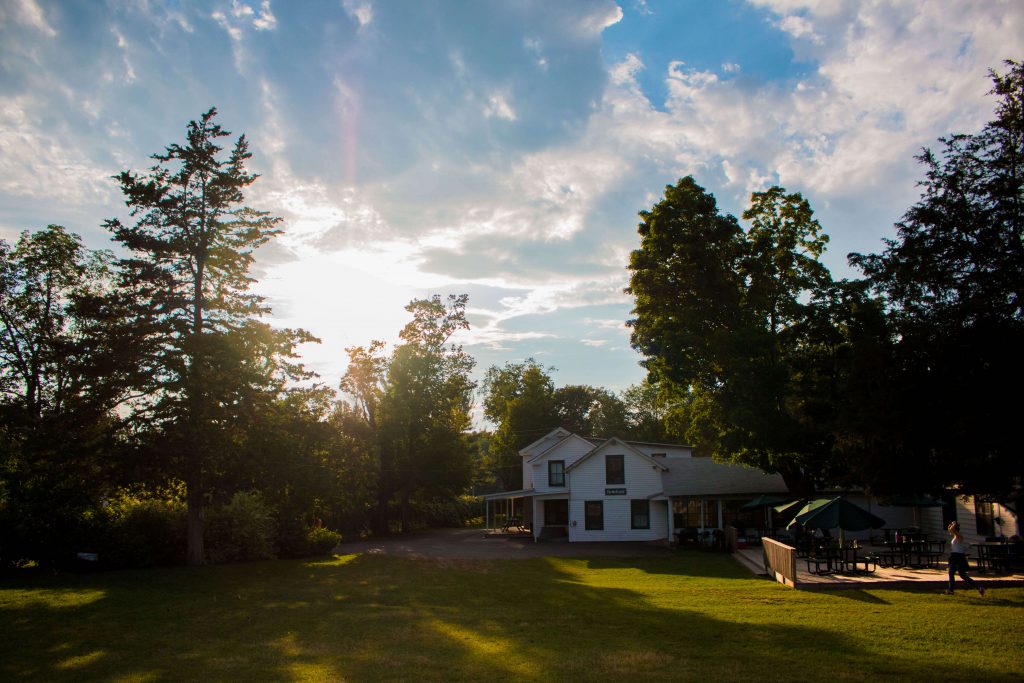 – The Adventure staff received an amazing number of signups for Whitewater Rafting that they actually made the trip down the Deerfield River twice — once with Junior and Middle participants and once with Super Seniors.

– Throughout this week are the Penalty Shootouts at Soccer. The male and female winners in each division will be put in the Book of Records.

– Today is the Canadian Doubles Tennis Tournament. Played in proper style, campers are paired up to compete against a single counselor. In most years, only counselors make it to the final, but we’re definitely in store for some great, friendly competition.

– Kemp the Storyteller was back for the fourth summer in a row! One of the most special night activities each summer, every division got to experience some truly amazing entertainment.

– Our oldest campers are packing their bags! Next Tuesday, the LTs will make the journey all the way to Montreal, while the Super Seniors will get to explore the great city of Boston. Both trips are often regarded as the highlights of many campers’ summers.

– Another massive LT Carnival is in store for this weekend — now regarded as one of the most popular special events of the summer. New to the Carnival this time around is the Pit Stop, a special area located between the Garden and the Playhouse complete with beanbags, coloring, bubbles, and anything and everything else needed for a true pit stop. Special thanks to everyone in the kitchen for baking hundreds of cookies for cookie decorating!

– Auditions and rehearsals for the second play — a musical revue — are also well underway!

That’s all for this week. Here’s a copy of today’s Schodack Scoop, and have a wonderful week! 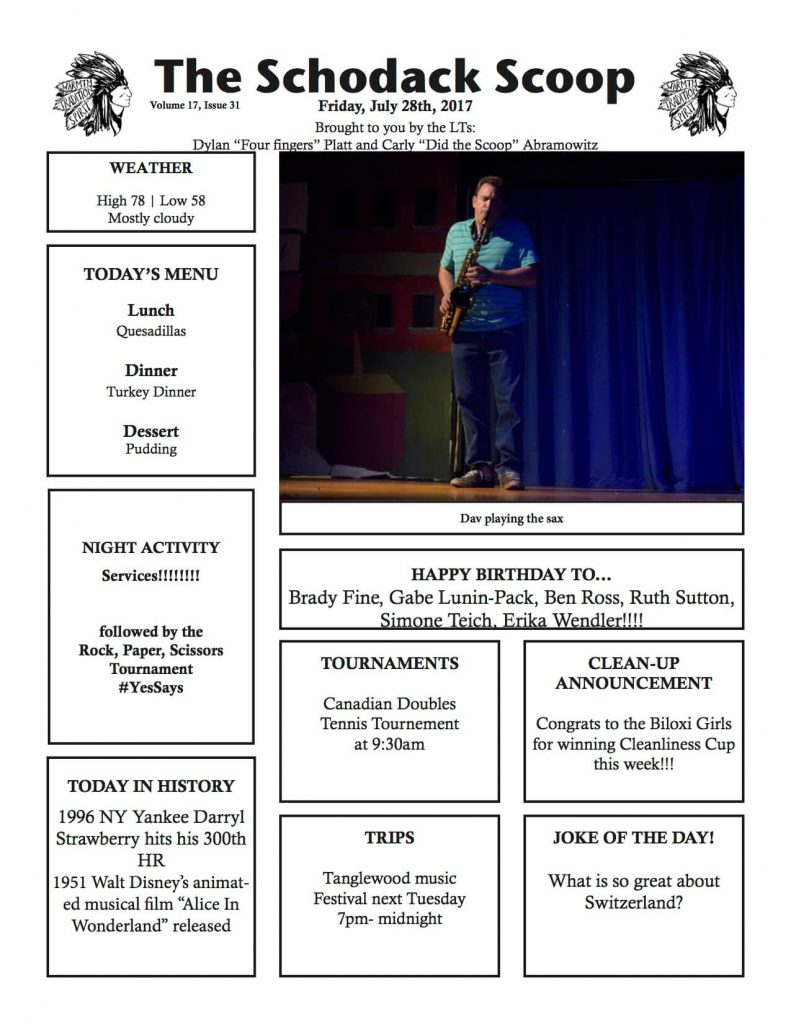 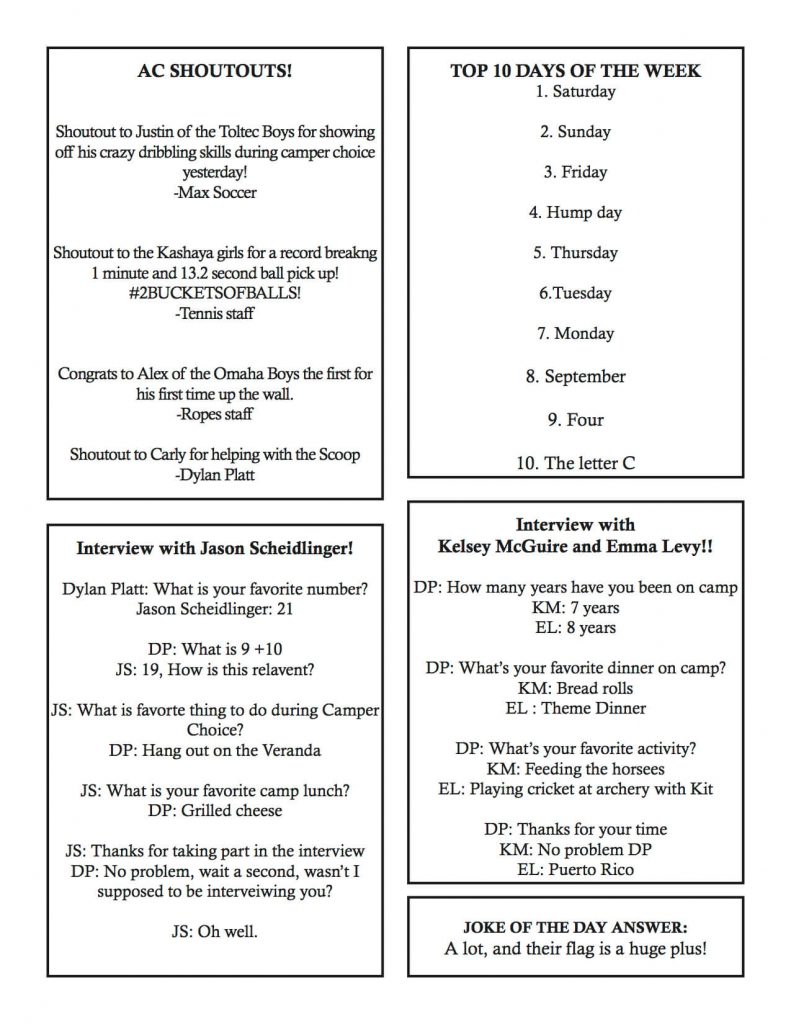