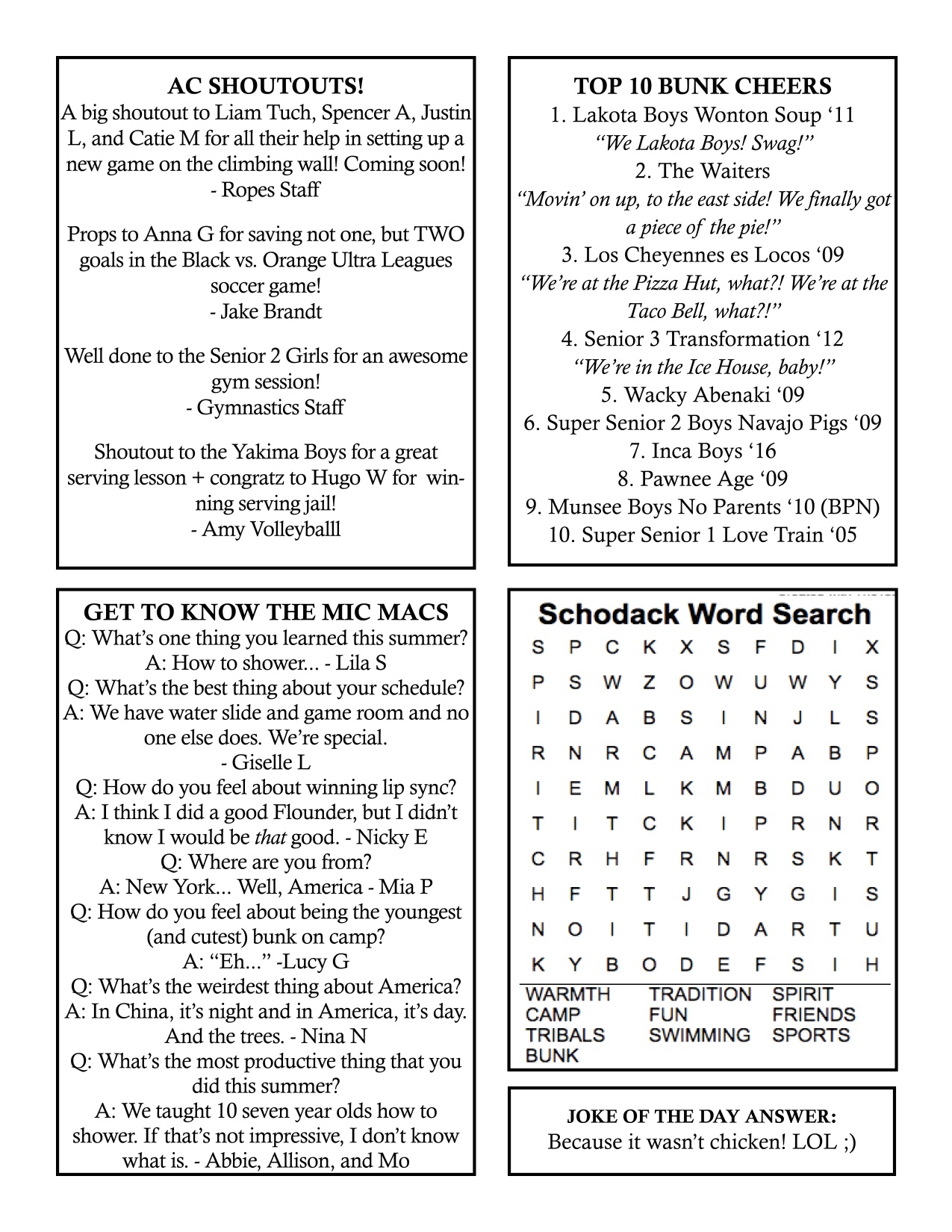 It has been a great week here in the 12123! This has been a jam-packed week of fun and excitement as we are cruising through the summer.

I want to fill you in on some of the all-camp events this past week:

Friday was a special night for Camp as the camp gathered for our weekly Services. This week’s story from Paul was the famous “Uncle Lou Hated Rocks” story! It is a crowd-pleaser, with lots of Camp Schodack history in it! Ask your children about it in your phone call this weekend.

There was also our annual Rock Paper Scissors Tournament for anyone who wanted to participate. The Garden was full of energy as everyone cheered on their friends as the field of players got smaller and smaller. There was new champion crowned – Chris ACS – the first time a member of Head Staff has ever won the event!

We finally had some rain this week, but it certainly didn’t stop the fun! We had an all-camp Rainy Day Activity in the Playhouse – our traditional “Odds and Evens” event! The Whole Camp gathered to see who had the best luck. Dressed in his famous purple onesie, Owen tossed two large die in the air while the whole camp had to guess if the combined numbers would be odd or even. The winner, after guessing correctly for every single round while the whole camp cheered them on, won a prize for their bunk. It was a great escape from the rain with everyone dancing to music in between rounds.

Our weekly theme meal was “Country/Western Night!” All the tables were covered with red and white plaid tablecloths and the camp chowed down on pulled beef brisket sandwiches on pretzel buns with cornbread! Keeping with the theme, our Leadership Trainees (LT’s) had a Hillbilly themed-day for Challenge Day. They competed in relay races and a chili cook-off competition! Middle Boys also had a similar day, as they dressed like cowboys in the afternoon and had a western-themed afternoon searching for gold!

Exciting things are happening at Hockey as the camper-counselor tournament has been a big hit. Lots of teams have been competing across all ages of camp.

Ultra Leagues are really heating up too as we get nearer to the Playoffs. In basketball and soccer, those who signed-up to play in our more competitive sports league are playing their hearts out. It’s exciting to see who will make it to the championship round.

At Campers Choice, there have been a lot of fun, extra activities being offered! Creative Writing has been a great place for campers to write poems or short stories that get published in the Scoop, our camp newspaper! Fishing has also been a great way for our anglers to get some action. During Campers Choice, campers can sign up to catch fish at the lake! And of course the ever-popular Outdoor Cooking continues full steam ahead. Campers love cooking pizza pitas, banana boats, Belgian waffle sundaes and guacamole…just to name a few!

On Tuesday this week, Junior and Middle went bowling and to a movie while Upper Camp went mini-golfing and to a movie. Our LT’s had a great three days in Montreal! This two-night trip was an amazing time for the LT’s and highlights included exploring Old Montreal, Jet Boating on the St. Lawrence River and visiting the La Ronde Amusement Park!

Everyone is practicing for tomorrow night’s “Bunk Plaque Night,” our final Triple Crown event of the summer. Each bunk will sing a song about the incredible summer they have had and show off a plaque representing their bunk name. Wish them luck!

I’ve included another copy of our daily newspaper from this past week below. Hope you enjoy it and I’ll catch you all next week! 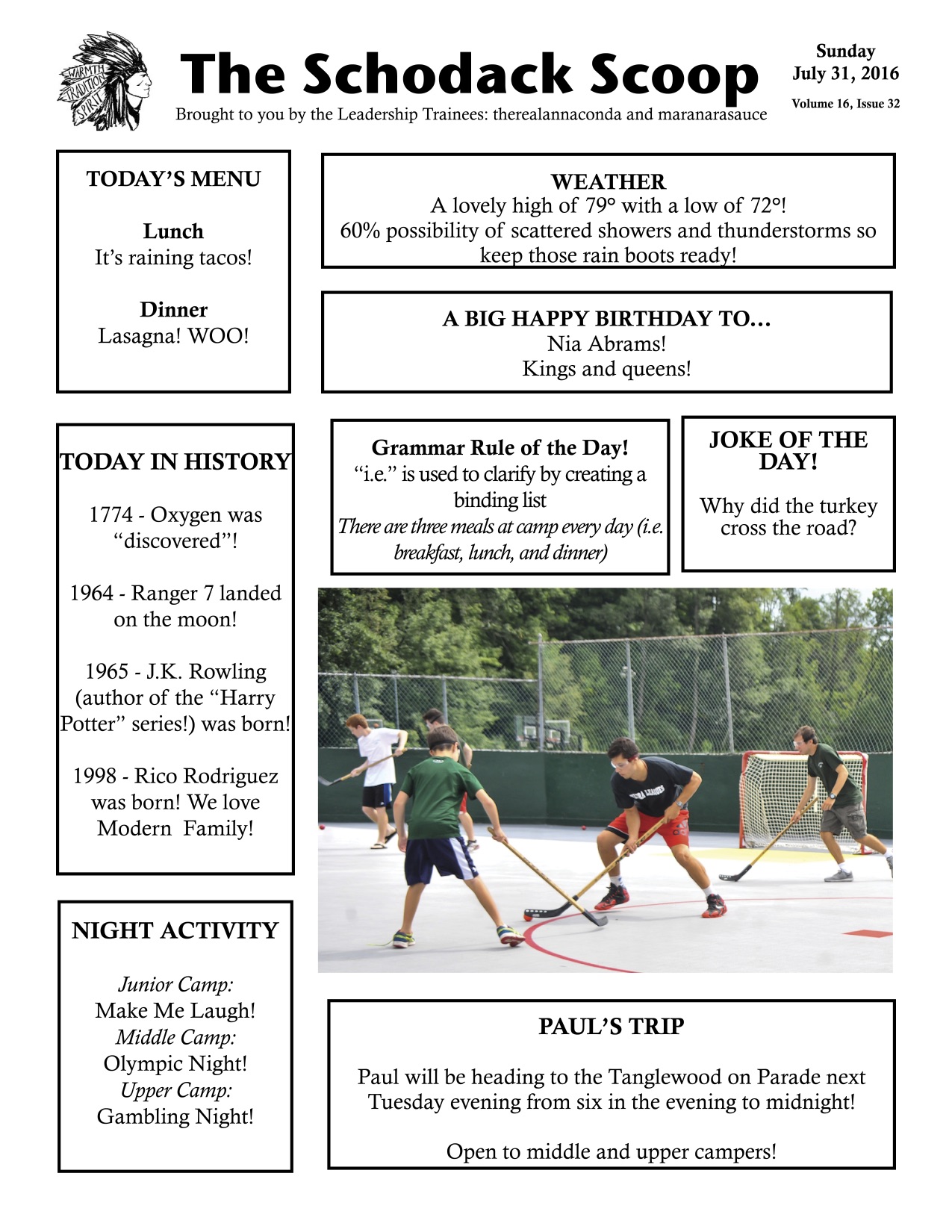