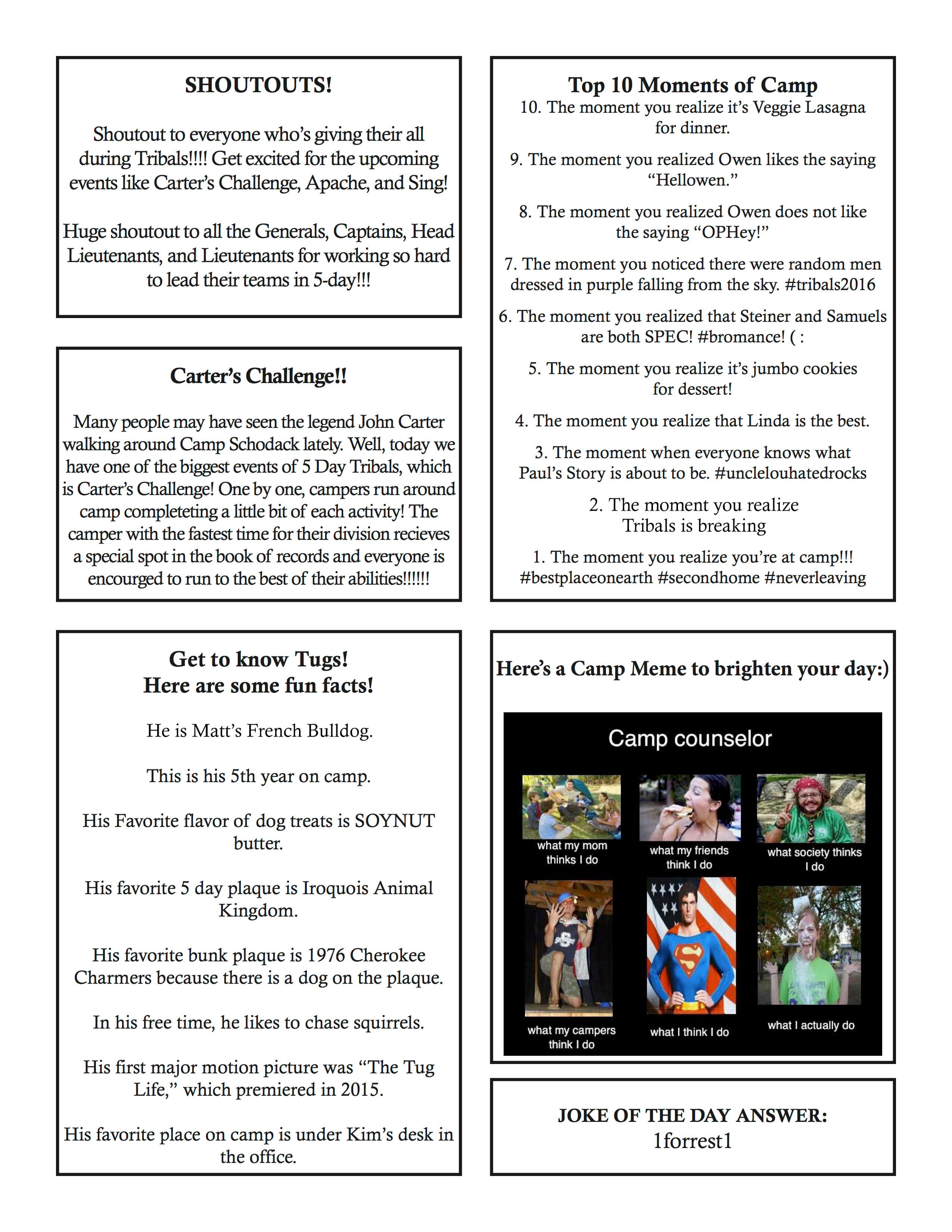 Hello all! Welcome to the final newsletter of Summer 2017! Wow, the summer has flown by!

Last week’s Bunk Plaque Night was a huge success, and we have our first Middle Camp Triple Crown winner since 2007! Special congrats to the Omaha Boys, who wrote their own lyrics to “One of Us” by New Politics and created a Netflix-themed plaque called “An Omaha Original.” Our winners for Junior and Upper Camp were the Kiowa Girls with “Kiowas in the Hood” and the CITs with “CIT Story.”

Also this week was the final Trip Day, to either Six Flags or Saratoga Springs and Ice Skating. Thankfully, the rain held out for the majority of the day and campers were able to enjoy the wild roller coasters, the delicious food, and the smooth ice of the Albany Hockey Facility.

The following day we had the LT Show. Campers and staff alike always look forward to this night each year. From singing and dancing in front of the whole camp to working stage crew or the tech booth to creating the 15-page program, every single LT participated in the show in one way or another. It’s incredible what this terrific group has achieved this summer.

Later that evening, the entire camp was transported to another world for Tribals break of 2017! Continuing with this summer’s Scooby Doo theme, a group of Head Staff dressed as monsters led the whole camp from the Playhouse to the Garden, only to be whisked back to the Playhouse which was decked out in glow-in-the-dark lighting, cobwebs, and all sorts of spooky stuff. Finally, Head Staff members dressed as the Mystery Gang came back to save the day, restoring Tribals for all of the campers and staff.

Day One of Tribals began with the announcement of the team names. Jacob Plotkin (Super Senior Boys GL) and Megan Jaske (Super Junior Girls GL) took the helm of Seminole Creation, while Evan Snerson (Super Junior Boys GL) and Kristyn Bennett (Head Pool) led Iroquois Prestige. Following the reveal, everyone headed out to the pit for Hatchet Hunt. After an intense 20 minutes, Jacob and Evan finally pulled the hatchet out of the dirt, hand in hand, meaning that both Iroquois and Seminole split the first points of Tribals.

After a jam-packed day of activity periods, everyone headed down to the 31st Annual Marathons. Separated by gender and division, each group got the option to take their turn around the course, at varying lengths depending on age. While the winners did get their names entered into the Book of Records, each and every participant earned a point for his or her team.

We continued yesterday with another pair of activity periods, followed by the Dashes across the Main Soccer Field and the Individual Medleys at the pool. In addition, our traditional Spelling Bee and Family Feud Trivia events also took place for major Tribals points! All of these events were organized by division and gender as well, and are favorites for allowing the whole camp to participate together.

Still to come in the next few days are:

– “Sing,” where the whole camp gathers in the Playhouse and the two teams take turns singing their final songs for a panel of judges. This is always an emotional night as it signifies the nearing end of camp.

– The Apache Relay, where each individual camper plays a role and contributes to their team’s performance in an all-across-camp relay race.

– The Final Services, which will be led by the 2nd Year LTs.

– Banquet, the final dinner on camp, which includes a special menu and decorations on every table. This is always one of the most spirited meals of the summer!

Thank you all for joining me this summer! I hope this newsletter gave you an insider’s eye into the goings-on around camp, and please feel free to send us a note at [email protected] for any comments or suggestions for next summer’s newsletters! 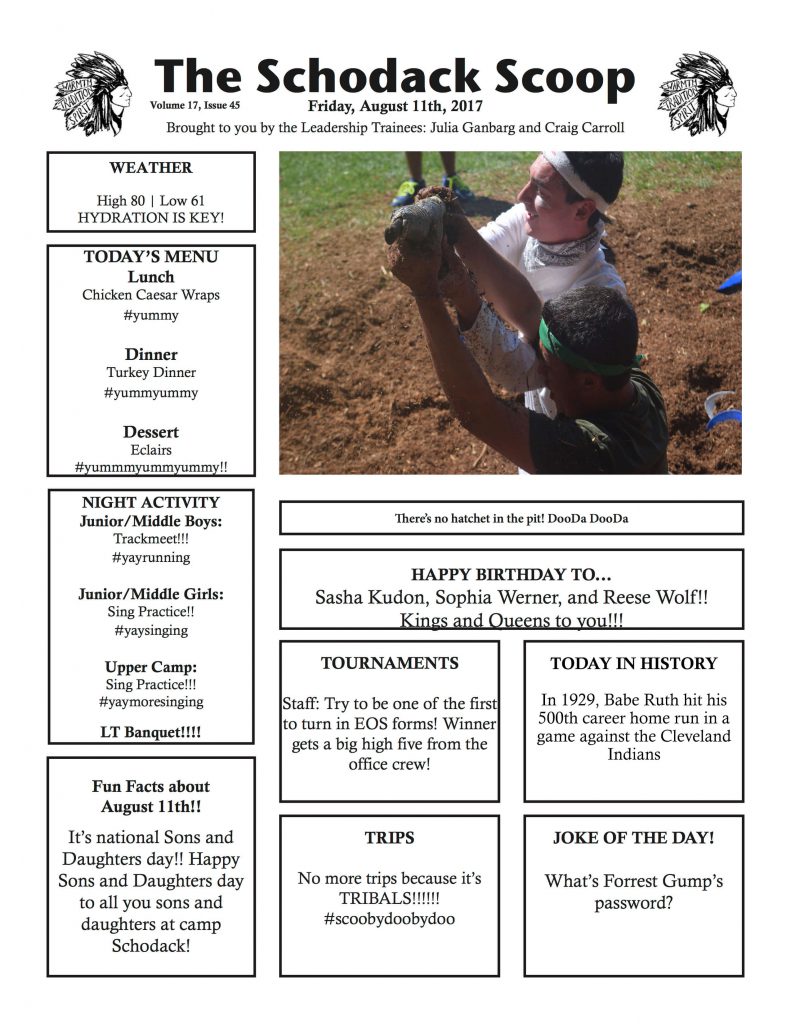 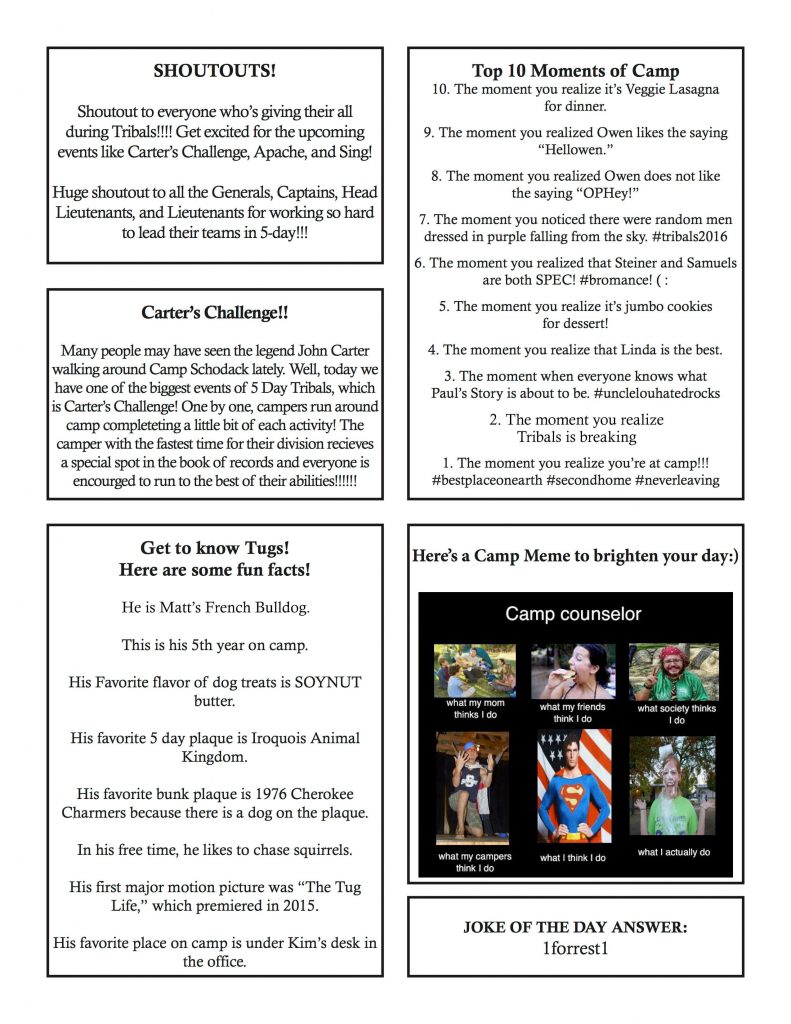