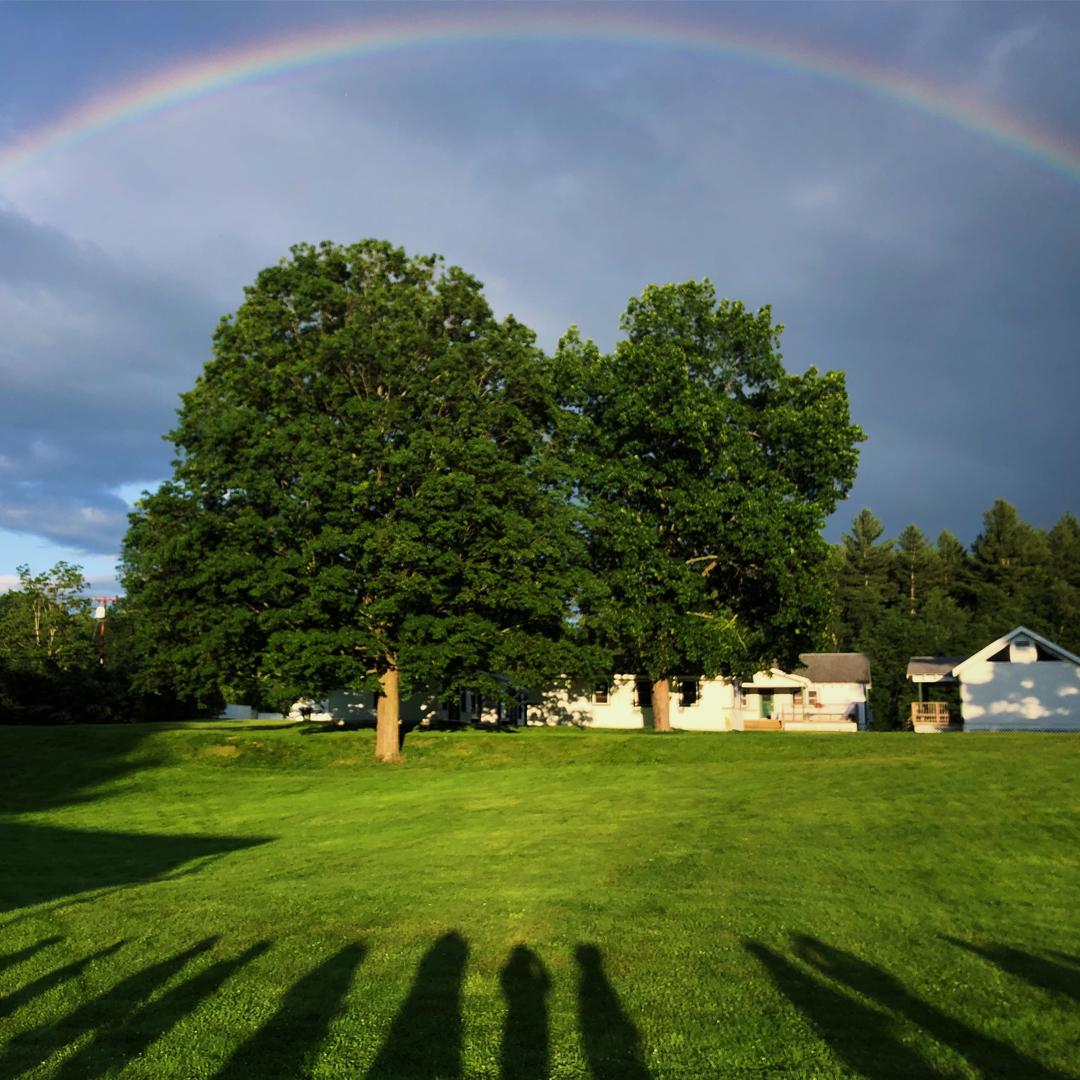 Weekly Newsletter 1: Welcome Back to Camp!

Summer 2019 is here and that means newsletters are back!

Whether you’re a camper, counselor or parent, we know you’ve been eagerly counting down to the best day of the year…OPENING DAY OF CAMP!!! Two days ago the buses rolled in and a new summer began at 40 Krouner Rd. One of the most anticipated traditions at Schodack is greeting campers off the buses with huge cheers, warmth, tradition, and spirit by all staff members. Our staff at the 12123 could finally announce that SUMMER…2019…HAS…BEGUN!

For those of you who haven’t met me yet, my name is Carter and I have been coming to Schodack since 2002.   I first traveled across the pond as a bright-eyed 19-year-old and was a Group Leader for the Chickasaw Boys. I will update you weekly on all the wonderful things happening here at Schodack with pictures and videos captured by our fantastic Communications Team starring Milton (Photo) and Mimi (Video).

We will send out email reminders each week on Friday with a link to our blog so you can get the latest updates on everything here at camp. 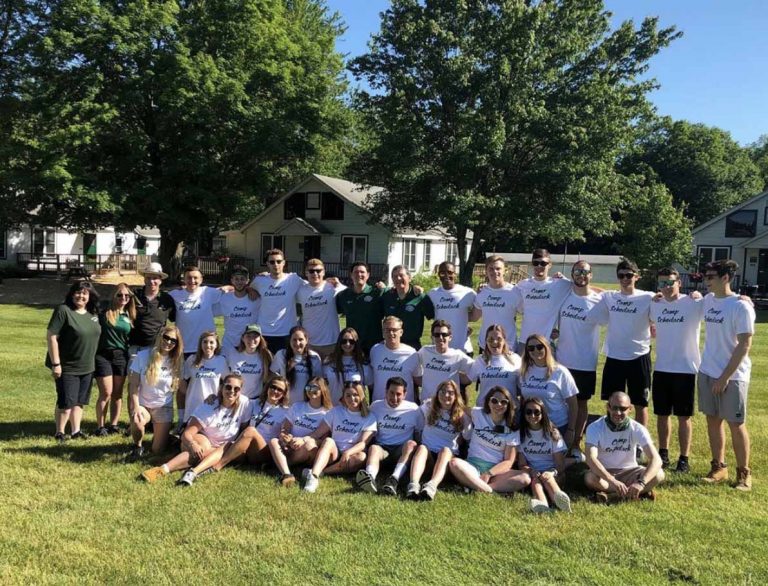 Here is what you should expect every week:

So sit back and enjoy the first of our summer updates for 2019!

The first two days of camp were full of high energy and excitement with old friends reuniting and new friendships blooming. Campers arrived from all over the country by every possible mode of transport.  They were greeted by the staff that had arrived 10 days earlier to begin their orientation and prepare for the summer. Seeing our campers, both new and old, welcomed to Camp with so much love and warmth never ceases to amaze. It was equally heart-warming to see pictures posted online by so many of our families just before the campers boarded the buses and waved goodbye for the summer. 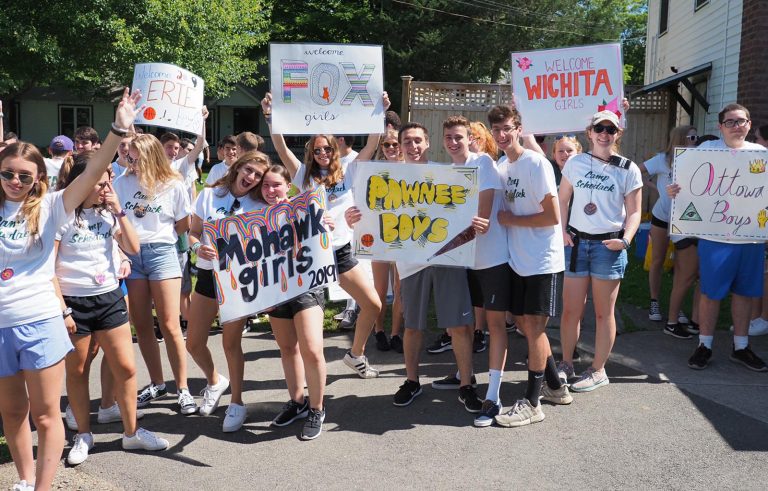 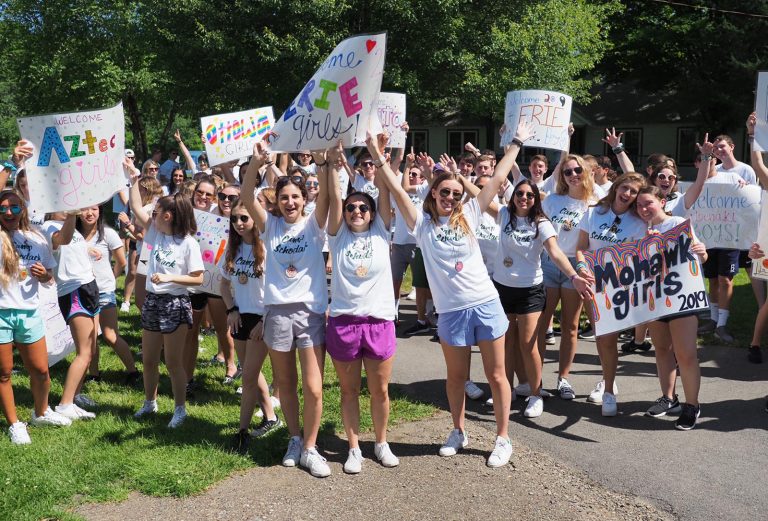 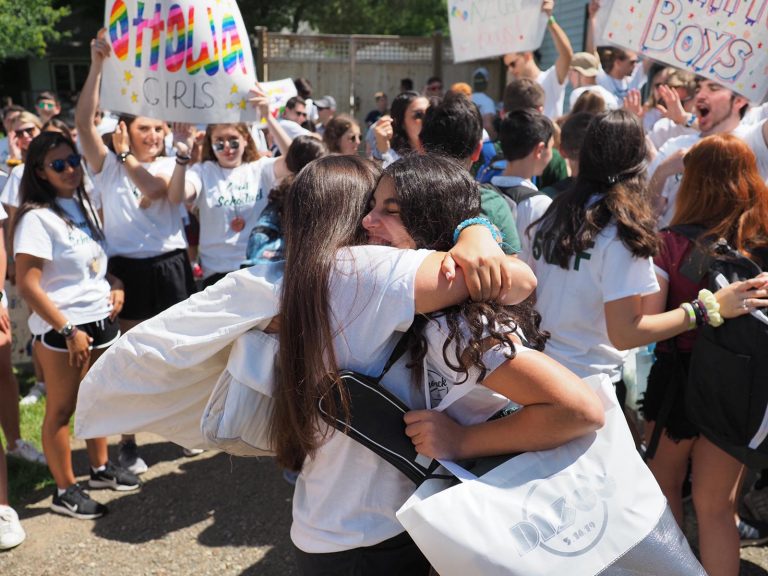 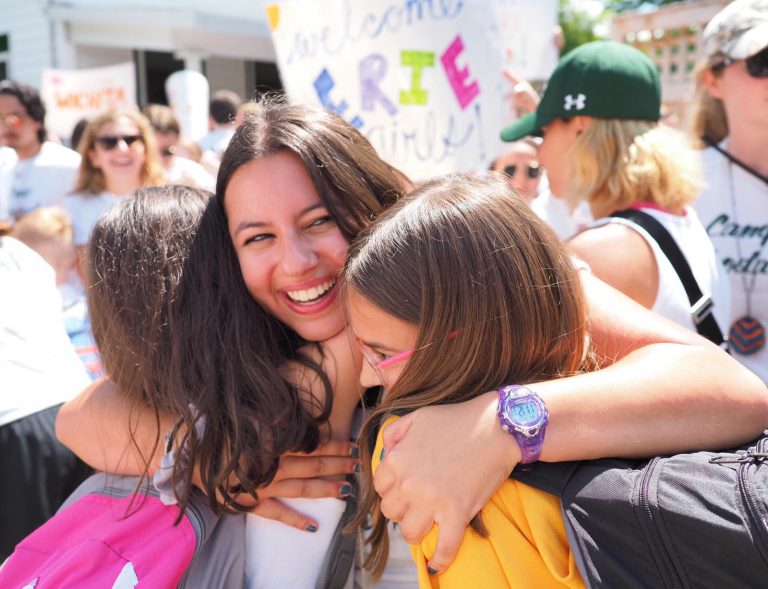 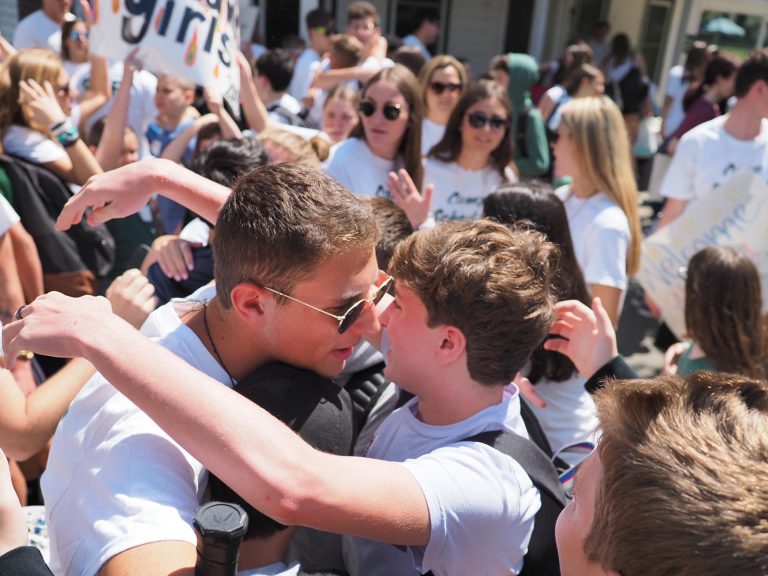 After the amazing greeting, campers headed to their new bunks for the summer.  They found the bunks beautifully decorated, all of their belongings organized and packed neatly away, giving the immediate feeling of being cozy and settled in their summer home. While at the bunks dropping off their bags, name games were flying around and new friends were made, as everyone got to know each other again and catch up on details of the winter. Many bunks started writing ‘Bunk Rules’ for the summer,  where everyone has input into how they want the bunk to coexist happily throughout the summer. Of course, their excitement was building as they made their way from the bunks to the Dining Hall where the LTs served that first all-important and most famous of Camp meals – Grilled Cheese and Tomato Soup! 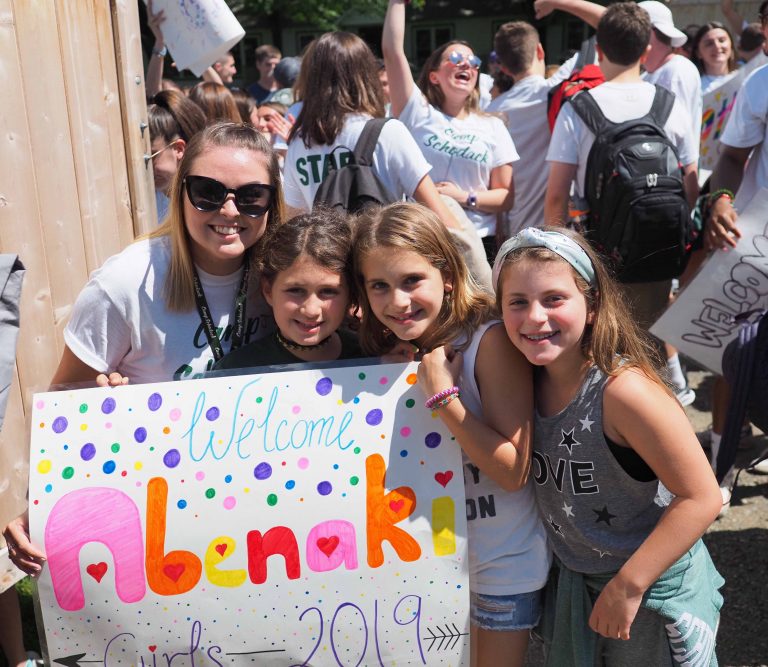 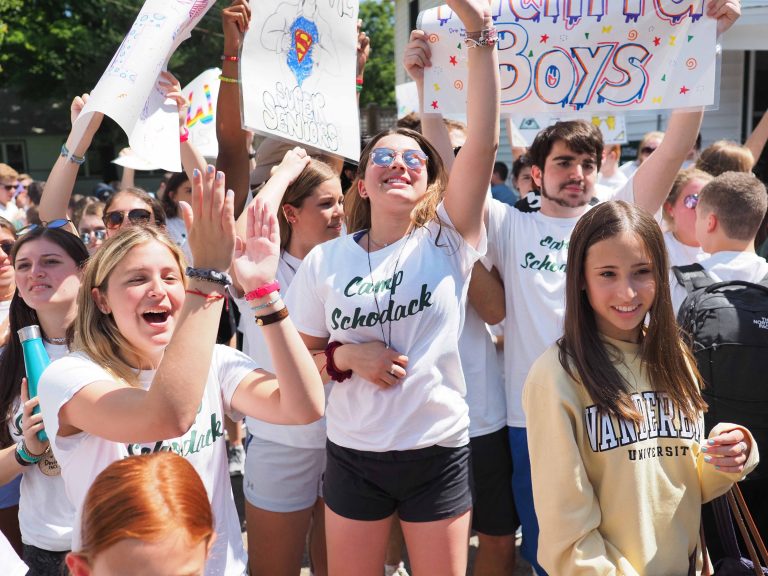 After lunch, everyone returned to the bunks and put on their swimsuits to begin their afternoon schedule, making sure that everyone did their swim tests, had health checks and got that all-important bunk photo.  The photo is sent home at the end of the summer and will also be featured in the yearbook at the end of the summer. As the groups made their way around Camp each bunk created a new bunk cheer that they shared for the whole camp at dinner.

After dinner, all Campers and Staff headed back to their bunks to get showered and put on comfy clothes in anticipation of our first-night tradition…The Counselor Show! As the first all Camp event, the counselor show holds a special place in many people’s hearts. It is the first time the staff get to show off their talents to our campers…and what talents they have! Meg Pool showed what an amazing voice she has as she sang and Jayna Gummins and Eli Wasserman did a fantastic Ed Sheeran duet.  The possible highlight of the show for many was Division Head Ben Weiner and the Super Junior Boys staff putting on an epic choreographed dance! It is safe to say that everyone had a great time and really enjoyed the show.

After the show, everyone went back to their bunks to settle down for the night and dream of the first full day and all of the activities and adventures it would hold. 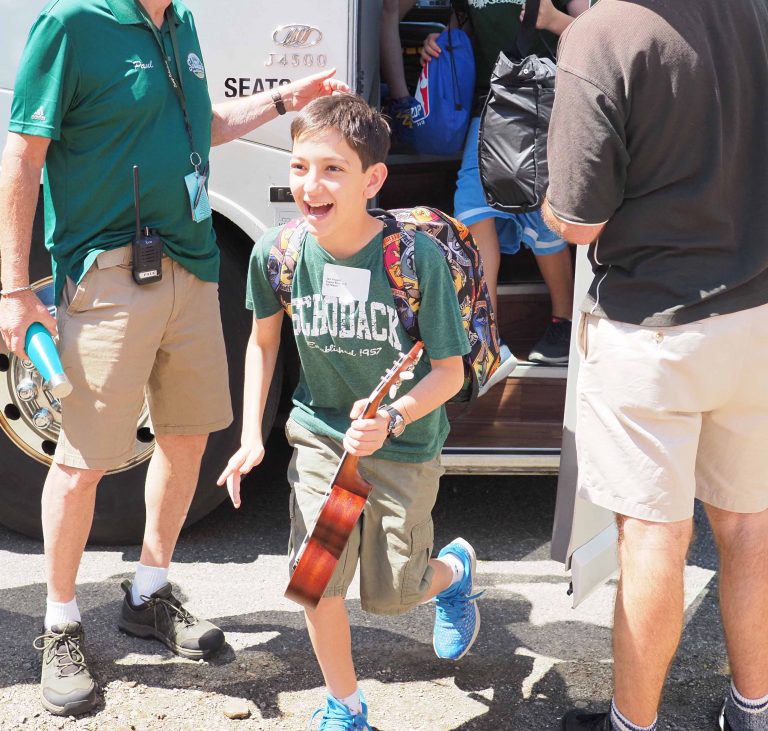 Division highlights from the first couple of days

Here are some Highlights from the first 48 Hours!!

*Every Junior Boy loved the counselor show and said “we wish we could be in it!”
*All the bunks made bunk cheers and are showing them off to the rest of camp.
*Both Junior Boys bunks have been to the pool and played water basketball as part of their first swim period.
*Chocolate milk was a big hit at lunch and we maybe tried to sneak in a couple extra cartons 😉
*Two standout periods that we did all together were an awesome afternoon at the lake together yesterday and a wildly fun dance period playing freeze dance!

10 Fun things Junior Girls have done in the last 48hrs

– Sung “Friends” for the first time this summer (or ever!) at the end of the counselor show

– Enjoyed a morning of activities; Aztec went to soccer, dance and basketball, and Abenaki to basketball, low ropes and hockey before cooling off at the lake

– Finished the day with Highs of the Day and cookies

That’s all from me and the Junior Girls – Ella

-We all had a super exciting first day: bunk activities, Night at the Races Night Activity, Counselor Show…Awesome start to camp.

-All Super Junior Boys got buddied up and played Bingo at Camper’s Choice to get to know all our activity areas
-The Nyack boys created a secret bunk handshake that only they know!
-The Fox Boys had an awesome first Double-Period at the lake!
-the Erie boys had a great period of basketball today and said it was their favorite so far!
-the Mohawk boys had a competition at gymnastics of hanging on the uneven bars…the record was 63 seconds!
-The Super Junior Boys staff did lip sync during counselor show to Cascade (every time we touch)

We are having so much fun…Jess!

Looking forward to updating you all about our adventures next week – Kaish!

Love from me and all the Middle Camp girls – Grace 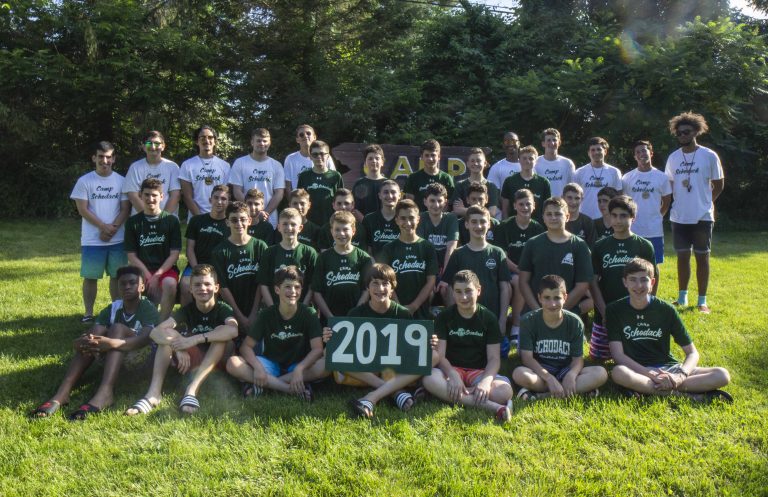 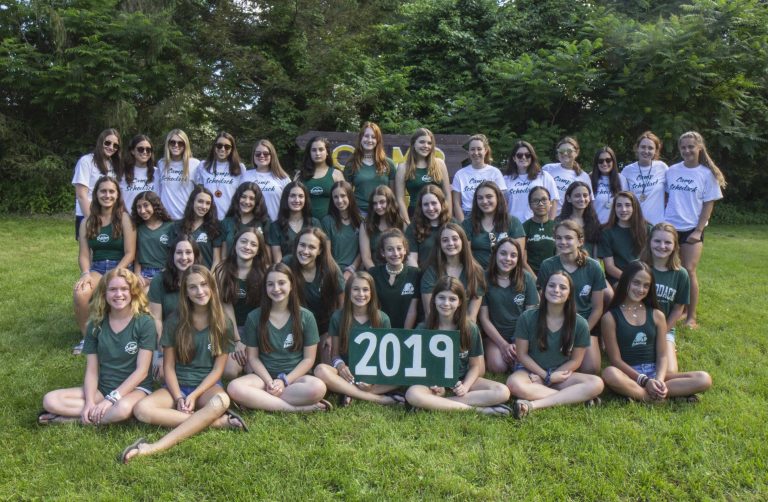 The Super Seniors have had a whirlwind of a first few days at Camp Schodack. After patiently working through the opening day rotations and successfully passing our swim tests, the Super Seniors enjoyed watching their staff perform the “Woah” on stage at the Counselor Show.

During the first day of activities, the Super Senior Boys smashed it at baseball, team handball, kickball, and a whole host of other sports. The Super Senior Girls had their first lake period of the summer and had a blast – some of the girls stood up on the kneeboards!

In myriad activities, the boys and girls competed neck and neck. First, six campers had to collectively travel half the length of the hockey court on wooden skis. Next, seven campers had to bounce balls into buckets, and upon completion, the next seven campers took those same balls and had to roll them into a hula hoop. Then four campers relay-style sprinted to the hatchet pit to dig out Ziploc bags with keys, returning them to the base, where six campers had to build a human pyramid and crawl half the length of the hockey court. They handed the keys to the final two campers, who had to unlock a treasure chest and complete a puzzle. 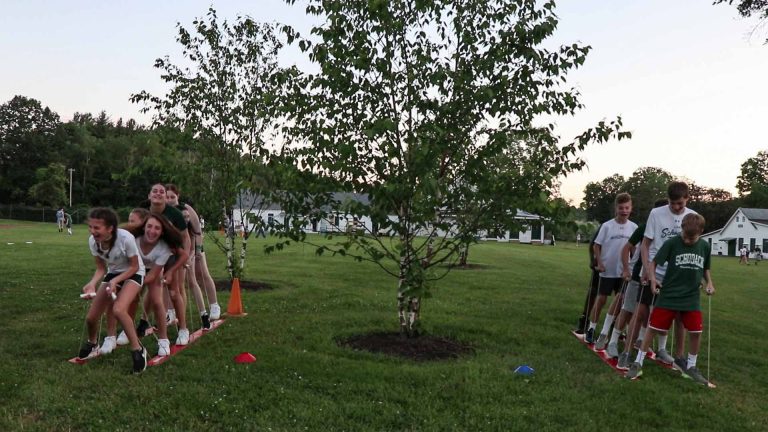 At the start, both teams were caught in the frenzy of coordinating the cumbersome wooden skis. The boys had an early head start, with the girls lagging behind. Finally, both teams found their rhythm, with the girls trailing the boys by nearly a full stage of the competition. The boys finished the ball toss rapidly, and the girls nearly caught up with them at the hula hoop roll. During the hatchet dig, the girls ran at breakneck speed and hunted successfully to find the ziplocked keys, finally closing their trail on the boys, who had held their healthy lead the entire competition. Already a quarter of the way through the human pyramid race, the boys felt comfortable in their position. Unfortunately for them, the girls were prepared to make the greatest late-game comeback Schodack has ever seen. In a victory unlike any other, the girls’ human pyramid moved like a single machine, completely overtaking the boys, who were stunned at the girls’ pace. Leaping back into the hockey court and handing over the keys, the boys were able to catch the girls, with both teams unlocking their treasure chests at the exact same time. As Doug says, “It always comes down to the puzzle,” and indeed it did. With the entire division watching from across the court, our final four campers raced to complete the puzzles, a lovely photo of Camp at a fire circle like the very one our winners would lead. In a stunning upset, the girls finished the puzzle, winning the first Fire Circle of the summer and kicking off what is sure to be an unbelievable summer of Super Senior Survivor Series.

I am thrilled to be back this summer as the Super Senior Division Head, and if this first installment of SSSS is any indication, we’re all in for a phenomenal summer – Shira

So that’s it folks, everything that has happened here in the first couple of days and some great pictures and video from Milton Photo and Mimi Video to share with you all. Keep your eyes peeled next Friday as our 2nd summer newsletter ‘The Schodack Spirit’ is sent out, sharing all of the great things that are happening here at the 12123!